In August 1928, Jørgen Rasmussen, the owner of Dampf-Kraft-Wagen (DKW), acquired the majority of shares in Audiwerke AG.[21] In the same year, Rasmussen bought the remains of the U.S. automobile manufacturer Rickenbacker, including the manufacturing equipment for eight-cylinder engines. These engines were used in Audi Zwickau and Audi Dresden models that were launched in 1929. At the same time, six-cylinder and four-cylinder (the “four” with a Peugeot engine) models were manufactured. Audi cars of that era were luxurious cars equipped with special bodywork.

In 1932, Audi merged with Horch, DKW, and Wanderer, to form Auto Union AG, Chemnitz. It was during this period that the company offered the Audi Front that became the first European car to combine a six-cylinder engine with front-wheel drive. It used a powertrain shared with the Wanderer, but turned 180-degrees, so that the drive shaft faced the front.

Before World War II, Auto Union used the four interlinked rings that make up the Audi badge today, representing these four brands. However, this badge was used only on Auto Union racing cars in that period while the member companies used their own names and emblems. The technological development became more and more concentrated and some Audi models were propelled by Horch or Wanderer built engines.

Reflecting the economic pressures of the time, Auto Union concentrated increasingly on smaller cars through the 1930s, so that by 1938 the company’s DKW brand accounted for 17.9% of the German car market, while Audi held only 0.1%. After the final few Audis were delivered in 1939 the “Audi” name disappeared completely from the new car market for more than two decades. 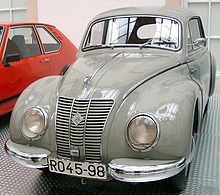 Like most German manufacturing, at the onset of World War II the Auto Union plants were retooled for military production, and were a target for allied bombing during the war which left them damaged.

Overrun by the Soviet Army in 1945, on the orders of the Soviet Union military administration the factories were dismantled as part of war reparations.[22] Following this, the company’s entire assets were expropriated without compensation.[22] On 17 August 1948, Auto Union AG of Chemnitz was deleted from the commercial register.[21] These actions had the effect of liquidating Germany’s Auto Union AG. The remains of the Audi plant of Zwickau became the VEB (for “People Owned Enterprise”) Automobilwerk Zwickau or AWZ (in English: Automobile Works Zwickau).

With no prospect of continuing production in Soviet-controlled East Germany, Auto Union executives began the process of relocating what was left of the company to West Germany. A site was chosen in Ingolstadt, Bavaria, to start a spare parts operation in late 1945, which would eventually serve as the headquarters of the reformed Auto Union in 1949.

The former Audi factory in Zwickau restarted assembly of the pre-war-models in 1949. These DKW models were renamed to IFA F8 and IFA F9 and were similar to the West German versions. West and East German models were equipped with the traditional and renowned DKW two-stroke engines. The Zwickau plant manufactured the infamous Trabant until 1991, when it came under Volkswagen control—effectively bringing it under the same umbrella as Audi since 1945.

A new West German headquartered Auto Union was launched in Ingolstadt with loans from the Bavarian state government and Marshall Plan aid.[22] The reformed company was launched 3 September 1949 and continued DKW’s tradition of producing front-wheel drive vehicles with two-stroke engines.[22] This included production of a small but sturdy 125 cc motorcycle and a DKW delivery van, the DKW F89 L at Ingolstadt. The Ingolstadt site was large, consisting of an extensive complex of formerly military buildings which was suitable for administration as well as vehicle warehousing and distribution, but at this stage there was at Ingolstadt no dedicated plant suitable for mass production of automobiles: for manufacturing the company’s first post-war mass-market passenger car plant capacity in Düsseldorf was rented from Rheinmetall-Borsig. It was only ten years later, after the company had attracted an investor, when funds became available for construction of major car plant at the Ingolstadt head office site.

In 1958, in response to pressure from Friedrich Flick, then the company’s largest single shareholder,[23] Daimler-Benz took an 87% holding in the Auto Union company, and this was increased to a 100% holding in 1959. However, small two-stroke cars were not the focus of Daimler-Benz’s interests, and while the early 1960s saw major investment in new Mercedes models and in a state of the art factory for Auto Union’s, the company’s aging model range at this time did not benefit from the economic boom of the early 1960s to the same extent as competitor manufacturers such as Volkswagen and Opel. The decision to dispose of the Auto Union business was based on its lack of profitability.[24] Ironically, by the time they sold the business, it also included a large new factory and near production-ready modern four-stroke engine, which would enable the Auto Union business, under a new owner, to embark on a period of profitable growth, now producing not Auto Unions or DKWs, but using the “Audi” name, resurrected in 1965 after a 25-year gap.

In 1964, Volkswagen acquired a 50% holding in the business, which included the new factory in Ingolstadt, the DKW and Audi brands along with the rights to the new engine design which had been funded by Daimler-Benz, who in return retained the dormant Horch trademark and the Düsseldorf factory which became a Mercedes-Benz van assembly plant. Eighteen months later, Volkswagen bought complete control of Ingolstadt, and by 1966 were using the spare capacity of the Ingolstadt plant to assemble an additional 60,000 Volkswagen Beetles per year.[25] Two-stroke engines became less popular during the 1960s as customers were more attracted to the smoother four-stroke engines. In September 1965, the DKW F102 was fitted with a four-stroke engine and a facelift for the car’s front and rear. Volkswagen dumped the DKW brand because of its associations with two-stroke technology, and having classified the model internally as the F103, sold it simply as the “Audi”. Later developments of the model were named after their horsepower ratings and sold as the Audi 60, 75, 80, and Super 90, selling until 1972. Initially, Volkswagen was hostile to the idea of Auto Union as a standalone entity producing its own models having acquired the company merely to boost its own production capacity through the Ingolstadt assembly plant – to the point where Volkswagen executives ordered that the Auto Union name and flags bearing the four rings were removed from the factory buildings. Then VW chief Heinz Nordhoff explicitly forbade Auto Union from any further product development. Fearing that the Volkswagen had no long term ambition for the Audi brand, Auto Union engineers under the leadership of Ludwig Kraus developed the first Audi 100 in secret, without Nordhoff’s knowledge. When presented with a finished prototype, Nordhoff was so impressed he authorised the car for production, which when launched in 1968, went on to be a huge success. With this, the resurrection of the Audi brand was now complete, this being followed by the first generation Audi 80 in 1972, which would in turn provide a template for VW’s new front-wheel-drive water-cooled range which debuted from the mid-1970s onward.

In 1969, Auto Union merged with NSU, based in Neckarsulm, near Stuttgart. In the 1950s, NSU had been the world’s largest manufacturer of motorcycles, but had moved on to produce small cars like the NSU Prinz, the TT and TTS versions of which are still popular as vintage race cars. NSU then focused on new rotary engines based on the ideas of Felix Wankel. In 1967, the new NSU Ro 80 was a car well ahead of its time in technical details such as aerodynamics, light weight, and safety.